Every ten days I share a quick digest of what I've been working on. Here's the latest. You can find more in the series here.

Since starting university in 2002 I've always had long-ish hair. At times it has been very long. This is mostly due to laziness, as booking a haircut always seems to be the last task I want to do on any given day.

True to form, the last haircut I had was in July 2019 - and my hair has recently been starting to get very long indeed. Even though most hairdressers are still open in Sweden, I've been trying to be a good citizen and enforce a level of social distancing much higher than many people here are. In short, getting a normal haircut right now is out of the question.

So instead I shaved it all off. I now have probably less hair than at any point in my life since birth. 5mm all over. It feels pretty freeing, to be honest - it dries in 30 seconds, I don't have to worry about fixing it to look good all the time, and all of the hats I own fit a little better than they used to. I did a video call with someone who had never seen me before, and they didn't scream, so I'm calling that a win.

After doing it, it occurred to me that this is the kind of thing that many people do for charity and that may charities need money right now. So I posted on Facebook that I'd cut all my hair off, but was withholding a picture until people had collectively contributed £250 or more to Doctors Without Borders. Normally I'd have chosen an environmental charity, but this situation seemed to call for something more appropriate.

Donations came in fast - we reached the half-way point within an hour. But then they slowed again as Facebook's algorithm decided that my post wasn't worth showing in the news feed any more. So I had to do some outreach on specific people I thought would want to see the devastation incurred on my scalp. In the end - including donations from people who donated on the charity's website because they didn't want to use Facebook - we hit a total sum of £326.64.

I was pleased, because I'm not normally the kind of person who does charity appeals (though I try to contribute to those of others). If shaving off my hair, in a situation where I'm not having to see anyone anyway, can help bring hundreds of pounds of medical care to some of the poorest countries in the world, then that can only be a good thing.

If you're reading this and haven't yet contributed to my appeal but want to, then make a donation to Doctors Without Borders and forward me proof and I'll add you to the total.

One of the many reasons why I found living in London a bit stressful is because I was always missing something. There'd be a fantastic exhibition, or restaurant, or concert that I could go to every single night of the week. I just didn't have the energy for it all. I fixed it by moving to a smaller city that still had a lot going on, but not overwhelmingly so.

Suddenly, though, all of the world's amazing exhibitions and concerts and workshops and courses have all moved online and I'm getting that feeling again. Keeping up with all of the zillions of new amazing opportunities to experience things on the web is becoming exhausting. I'm finding myself limiting the amount I go on Twitter so that I don't find out about another incredible online event that I'll be sad about having to miss because I'm just tiiiiiired.

This is, of course, one of those "my diamond shoes are too tight" complaints. I'm incredibly lucky to be living in a world where this kind of thing is even possible, and to be old enough to remember the slow times when it wasn't possible. But still - if you're thinking of arranging some sort of amazing online event, save it for a month or so when we're all still locked down but the initial buzz has worn off.

Alright so I complained about all the cool stuff going on but I did really, really enjoy one thing I tuned into over the weekend. Now Play This is/was a really cool-looking festival of experimental game design at Somerset House in London, but it was cancelled. Instead, there's a series of online events - and the one I enjoyed the most was a virtual field trip through Half-Life, led by game designer and artist Robert Yang.

I have a very strong personal history with Half-Life. I played it to death. To such an extent that I can quote most of the lines of dialogue in the game verbatim ("Why do we all have to wear these ridiculous ties?"). So I loved seeing Yang talking through some of the history of the game and highlight some particularly wonderful bits of level design. If you played the game, you'll love it. If you didn't, it's still worth a watch for a tour of the earliest bits of one of the most influential titles in videogames history.

Here's the two-hour session in full:

I would love to see Yang continue these field trips through the rest of the game. Hopefully that'll happen!

I did it. I pulled the trigger and ordered my plotter. The Axidraw V3/A3, if you're curious - which, at the time of writing, is actually available at a 10% discount on the Robotshop website in the EU. Not too bad.

To go with it, I also invested in Filmic Pro and Filmic Remote for the iPhone. The former is an app that allows total control over the iPhone XS camera, and the latter lets you set up your phone as a camera and then use another device (an iPad Pro 9.7-inch, in my case) to control it. It's a pretty hi-tech setup, until you realize that my "tripod" is just a plank of wood extending over the place where the plotter will sit.

It should arrive in a few days. I'll film some unboxing stuff, and maybe a short setup video because it doesn't look like either are currently on YouTube.

Next thing to investigate is some video editing software. I have Adobe Creative Suite, but I don't love using it because it usually feels like using a sledgehammer to crack a nut. Is iMovie still a thing? Is that too basic?

I've spent a good chunk of the last week doing some work for innovation think tank Nesta's Centre for Collective Intelligence Design. Their focus is pretty cool - it's about the combination of human and machine intelligence. That includes AI and machine learning projects, but also crowdsourcing and citizen science initiatives.

They've been funding a bunch of experiments on machine-human cooperation and I've been helping them build some stories around those experiments, alongside the crew at Storythings.

Hopefully I'll be able to help get some coverage of them published around the web.

Somehow, it's been more than a month since I last posted dataviz sketchbook pages. Oops. My only excuse is that I've been caught up in generative art instead. As such, here are four sketchbook pages inspired by the #generativedice hashtag on Twitter. Normal service resumes next time.

I've rebooted my newsletter. Beginnings is now Hello From Duncan. But before you rush off to subscribe, you should know that the content of the email is pretty much exactly the same as the content of these tenday notes. So if you're reading them here, then you probably don't want them in your inbox as well.

Or maybe you do? Maybe you're forgetful and don't remember to check back to my blog every ten days, and would rather they just automagically land in your inbox. That would be nice, wouldn't it? Yes, yes it would. You can sign up here.

It's lovely to be featured for what, I think, is the first time in Andy Kirk's "The Best of the Visualization Web" series. What I love about the series is that it's done several months later, once the dust has settled.

My Tools I Love series is what he featured, which gives me a good reason to keep writing for it. For a while I stopped because I was thinking I'd make a tools-oriented newsletter, but actually I'm thinking I'd rather keep just doing it like this, as infrequent blog posts.

I've got a bunch more tools I want to talk about. Tabula, Scripter, Copic Markers, probably my plotter (I am already pretty sure I'm gonna love it). So stay tuned for those in the coming months.

Well, the plotter arrived - and gosh it's fun. I was pretty excited about unboxing it, but I wanted to film the experience. Then I got so caught up in trying to figure out the right shots that planning took over from excitement and it took me a while to actually realise that I had a working plotter on my desk. But once I stopped filming and started playing it was really fun.

I've made five or six plots so far, just using templates included with the plotter itself (none of my own work yet). The main things I've learnt so far are that (a) it's actually really easy to plot things, and (b) it's not super easy to plot things beautifully - without little pools of ink at the end of lines. I think a lot of this is down to the paper and the pen, so I'm gonna experiment with that some more and probably follow up on some of the recommendations from the Axidraw wiki.

In the meantime, I've filmed a few short timelapses. As soon as I get some time to edit them into something publishable, I'll share the videos here. Here are a few images instead.

One of the Loud Numbers projects that I've been working on has involved crawling the Guardian API (why is there an aurora as the background to that page?).

I've been looking for stories about Brexit. Did you know that between the referendum and the leave date, the Guardian wrote 36,951 articles on the subject? Astonishing.

Anyway, I had some difficulties with accessing the Guardian API in Javascript (probably my fault, rather than theirs), so had to resort to Python to pull the data in the end - which wasn't too tricky. The idea is to sonify it a bit like a Geiger counter, a crackle each day that’s more intense when more articles are being written. Really looking forward to hearing how this one comes out.

Finally, I’ll leave you this week with one of my new favourite reads. The “It’s Just Me” manifesto, by David Hieatt from the Do Lectures.

Trying to do the same as everyone else but a little better than your competition will take you all your hours, all your energy and all the money that you can throw at it. Remember, there is only you. And, to most people, the difference will be subtle. You will have exerted maximum effort for the marginal gain to your customer. Instead, put all your effort into being different or first or, best of all, combine the two.

The rest is full of more excellent advice. Give it a read. 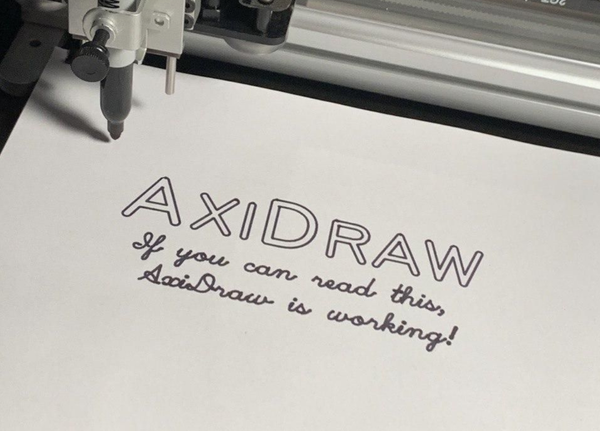 It was pretty good timing that my plotter arrived just before the Easter weekend. I had a full four days to experiment with it and start to get to grips 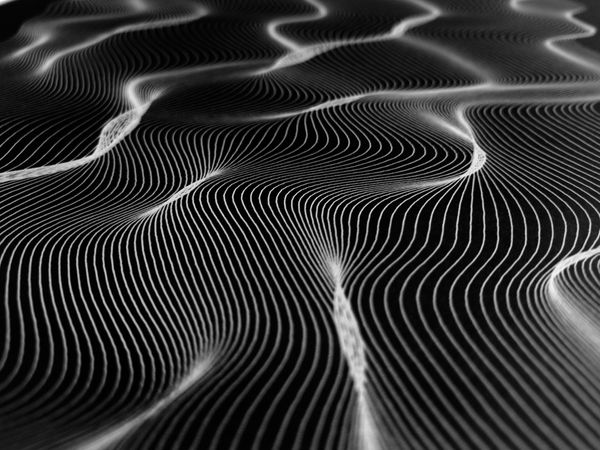 I'm extremely excited to say that I'm now the proud owner of a pen plotter. Specifically, the Axidraw V3/A3. I had a grand plan to save up money slowly